Yesterday my friend posted this photo with the tag “Last Day in Paradise.”

We think about it; imagine what it is like. Paradise.

Jesus mentions paradise in the 23rd chapter of Luke. The penitent criminal who believed that his soul would live on after death, that Christ had a right to rule over a kingdom of souls said to Jesus

“Lord, remember me when you come into Your kingdom. Jesus said to him, “Today you will be with me in Paradise.”

What is this paradise? The apostle Paul describes a vision “Paradise” in 2 Corinthians 12:1-4 where he speaks of  “the third heaven”. Revelation 2:7 says the tree of life is in Paradise; Revelation 22:14 says it is in heaven. The image of “heaven” in the bible is complex, sort of hard to nail down.  Is it like the Earth’s atmosphere (Genesis 8:2)? Or like interplanetary and interstellar space (“When I consider Your heavens, the work of Your fingers, The moon and the stars, which You have ordained…” – Psalm 8:3)?  Or the abode of God (“And may You hear the supplication of Your servant, and of Your people Israel, when they pray toward this place. Hear in heaven, Your dwelling place, and when You hear,forgive.”- 1 Kings 8:30)?

But listen to the clarity N.T. Wright offers in his book, “Following Jesus”:

“Heaven is God’s space, which intersects with our space but transcends it. It is, if you like, a further dimension of our world., not a place far removed at one extreme of our world. It is all around us, glimpsed in a mystery in every Eucharist and every act of generous human love.

The Christian hope then is not, then despite popular impressions, that we will simply ‘go to heaven when we die’… after death those who love God will be with him, will be in his dimension. But the final Christian hope is that the two dimensions, heaven and earth, at present separated by a veil of invisibility caused by human rebellion, will be united together, so that there will be new heavens and a new earth…

Heaven is the extra dimension, the God dimension, of all our present reality; and the God who lives there is present to us, present with us, sharing our joys and sorrows, longing as we are longing for the day when his whole creation, heaven and earth together, will perfectly reflect his love, his wisdom, his justice and his peace.

The ascension of Jesus, then, is his going, not way beyond the stars, but into this space, this dimension. The Jesus who has gone there is the human Jesus. People sometimes talk as if Jesus started off being divine and became human, then stopped being human and went back to being divine again. That is precisely what the ascension rules out. The Jesus who has gone, now, into God’s dimension, until that time the veil is lifted and God’s multidimensional reality is brought together in all its glory, is the human Jesus. He bears human flesh, and the marks of the man-made nails and spear, to this day, as he lives within God’s dimension, not far away but as near to us as breath itself. “

Our Father who art in heaven, hallowed be thy name. Thy Kingdom come, Thy will be done on earth as it is in heaven. 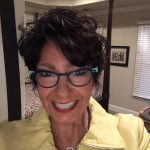 A blog by Sutah Robins.

Sutah is part of the Long Branch Community Group, serves faithfully on our Connections Team as well as our Greeting Team, and is one of the most excited, exciting persons out there.  If you don’t come to Park, there’s a good chance she’ll be inviting you soon – because she loves Jesus and and knows Jesus loves you, and wants you to know it too. We love that about her.